A statement from the state ministry of education which was signed by the permanent secretary of the ministry, Phoebe Sukai Yayi on behalf of the commissioner described the reported change of name as fake.

It specifically denied any plans to change the name of the state-owned tertiary institution to Magajin Gari Sambo University.

It also dissociated the state house of assembly, the secretary to the state government, the Registrar of the institution, and the entire university management from the reported change of name which the statement described as fake.

Members of the public were also urged to disregard the information on the change of name while warning those behind the misinformation to stop spreading fake news. 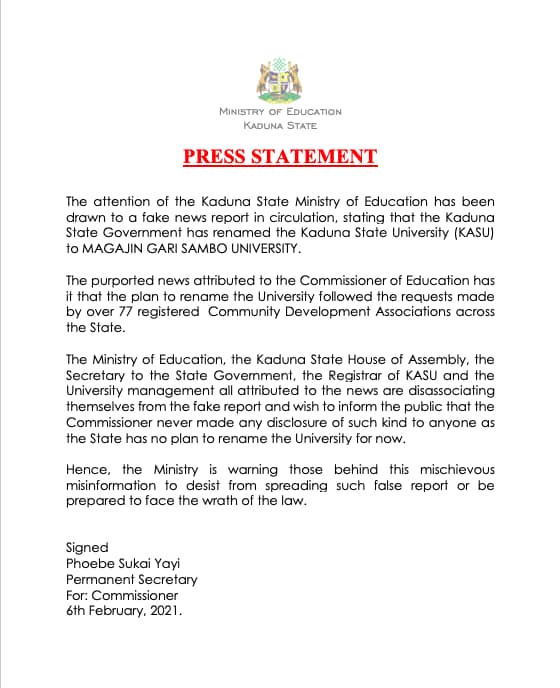 Meanwhile, Yoruba activist Sunday Adeyemo, also known as Sunday Igboho, has stated that only God can take away his life, stressing that no human can kill him.

Recall that Igboho had also issued a quit notice to herdsmen accused of sundry crimes in the Ibarapa area of Oyo and enforced same.

He also chased herdsmen from a community in Ogun state after one of his houses in Ibadan, Oyo state capital, was gutted by fire by those “opposed to his fighting.”

Speaking in an interview with The Punch on Sunday, Sunday Igboho disclosed that his family is worried over the cause he has been fighting.

According to the activist, no human being can kill him and he will not be distracted.

“I am not afraid of anything or anyone but God. God is the owner and controller of every soul. It is only God who can kill me. No human being can kill me, so I cannot be afraid of any mortal,” Sunday Igboho said.

“My children challenge and persuade me to quit every day. They wave the caution sign to me every time. My wife is also very worried about the cause that I fight but I have to do this for the liberation of my people, anyway. But I am equally worried for my people who are being dehumanized and oppressed in their own territory for no just reason. Those who should address the issue just fold their arms and watch because they are compromised. This struggle is for the good of all so that when I am gone they would not live in subjection.”